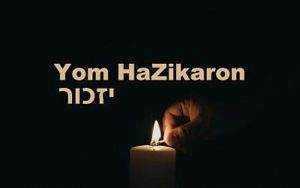 On Yom Hazikaron, Israel’s Memorial Day, when we remember those who’ve died in wars and terrorist attacks, thoughts of the fallen—past and current—fill my consciousness. This year, in addition to thinking of the fallen of Israel, I am also mourning the fallen in the current war in Ukraine. So many lives lost, especially young lives. So many tears, so much pain and regret. Each person who loses a loved one to the pitiless maw of such violence is permanently changed for the worse.

For me, the greatest benefit of getting older is having grandchildren. I am blessed to have two (I’m sure they’d object to the word) lovely grandsons—ages sixteen and nineteen. Handsome, intelligent, witty, entertaining, creative, interesting, interested, and engaged in the world around them. Seeing them facing the future with optimism and energy, I can believe that their generation will do much better than the several before them.

I think about my grandsons with special gratitude and prayer when I hear of the casualties in Ukraine and of the terrorism in Israel. I think about my grandsons in mournful solidarity with a weeping mother or grandmother brandishing a photo of her child or grandchild. We are meant to bury our parents and grandparents—not our children or grandchildren.

In my family of survivors of the Shoah, we already had plenty to mourn from having lost almost all our relatives in Poland. But, during the 1956 Suez Crisis, we added yet another victim who didn’t live to die a natural death—my cousin Joseph, son of my mother’s half-brother, Moishe. Though I never met him, Joseph has had a profound influence on my life. Or, I should say, Joseph’s absence has.

Uncle Moishe had left the family’s poor village of Garbatka, in Poland, in 1933 to settle in Jerusalem. As the Nazi onslaught was tearing apart the family remaining in Poland, all the family members agreed to contact Moishe at the end of the war as a way to reconnect. My mother was the only one he ever heard from.

After surviving slave labor in a ghetto, work camps, Auschwitz, and a forced march to Bergen-Belsen, where she was liberated, my mother met and married my father in a displaced persons’ camp in Germany. I was born in Stuttgart, in October 1946. My parents and I immigrated to the US in early 1947.

From my earliest days, I remember my parents sending packages to Moishe’s family in Israel. My parents, who were barely getting by on my father’s arduous work in two jobs, had a metal hanging scale they used to measure the precise weight of each package, filled with carefully chosen foods. And, of course, we had a blue pushke can in the home for depositing coins. From those earliest days, I learned about sacrifice.

In addition to the food that was sent to Jerusalem, what also went into the mail, and was also received thereby, were flimsy blue aerograms, filled with tiny Yiddish script. In 1956, when I was ten years old, one of the eagerly received letters from Israel contained the news that Moishe’s oldest child, his son Joseph, was fighting in the Suez war. My mother, being the worrier that she was, then repeatedly wrote her brother for news of Joseph. Moishe kept avoiding answering, until his family could no longer bear my mother’s repeated questions. Finally, they broke the silence and revealed that Joseph, aged nineteen, had been killed.

On hearing this, my mother fell into a long depression. Even when depressed, my mother was high-functioning—she cooked, she cleaned, she kept our home orderly. But she wept constantly, which caused my father, me, and my young brother great anguish. I remember having to be so delicate with her, not easy for a ten-year-old. My mother’s suffering was increased by the regret that she had never met her nephew. And she suffered even further from having had the sad news withheld from her. Joseph’s death profoundly impacted my family for most of the year it took my mother to come back to herself. We subsequently learned that Joseph’s mother also fell into a deep depression, but one from which she never climbed out. 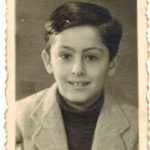 All I know of Joseph, aside from his early death, is based on two black and white photos that show a cute young boy of perhaps nine or ten. These photos add to the mystery that surrounds my first cousin, who will forever remain a stranger. One photo is of Joseph by himself, on the back of which he wrote a note thanking my parents for a gift. 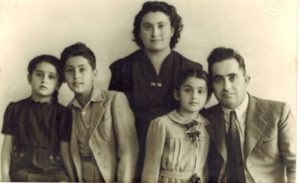 The other is a family photo with his parents and younger sisters. The script on the back indicates that it was being sent from Jerusalem to my parents. The date is clear—Nov. 1, 1946.

On seeing this date, I could not help but wonder if Moishe sent the family photo in response to hearing about my birth, which had been only a few days before. Of course, in these days of instant, easy communication, it is a trivial task for new parents to inform family members of their child’s birth. But, back then, communication between Germany and Jerusalem was not nearly so simple. Did my parents announce to Uncle Moishe by telephone that a new generation had been created from the ashes of the Holocaust? By telegram? By mail between Stuttgart and Jerusalem? Did Uncle Moishe then respond by sending his family photo from Jerusalem? Or is the proximity of dates a coincidence? And how did my mother react when she saw her brother’s beautiful family? That there’s no one left to ask compounds my sadness about the mysteries of my family’s piece of this 20th-century Jewish story.

Now, in the 21st century, I am also distressed that families are once again being torn apart—this time, because of the war in Ukraine. It is vital that we, the witnesses to the current horror, support the refugees and other survivors as they deal with their losses. Hadassah, among many other humanitarian organizations and people, has stepped up to bring hope and healing to those who’ve lost so much. But the need is great and will require our attention now and into the future.

A slightly earlier version of this piece appeared in Esther Erman’s Blog on the Times of Israel.