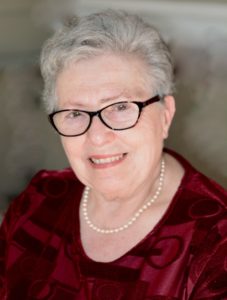 Here I’ll tell you about me, including my family story and how that influences my writing, which highlights the challenges, dreams, and accomplishments of strong women.

Learning English as a second language in kindergarten inspired me to study language and literature. My dissertation — “Mame-Loshen, Immigrants, and the Holocaust: Yiddish in the United States” — earned me a doctorate in language education from Rutgers University. I have taught language and other subjects to students of all ages and from many countries and cultures.

Despite being an introverted writer, I adore talking about books, writing, and the publishing world to readers and book lovers. Of course right now, I’m especially delighted to talk about any of those topics in the context of my newest book, Rebecca of Salerno: A Novel of Rogue Crusaders, a Jewish Female Physician, and a Murder. This is the book of my heart, as I am thrilled to shine a spotlight on the marvelous character of Rebecca, originally created by Sir Walter Scott for his 1820 novel Ivanhoe. What an extraordinary creation Scott came up with, at a time when positive images of Jews did not exist in European literature.

Perhaps one of the reasons I relate so strongly to Rebecca is because, like me, my parents, and multitudes of Jews throughout the ages, she was a refugee. Like so many others, Rebecca must flee a place that is no longer safe, searching for a new home. My parents were Holocaust survivors from Poland who met and married in a displaced persons’ camp in Germany after the war. I was born in Stuttgart. We arrived in the US in 1947 after a harrowing trip across the Atlantic. Then my traumatized parents had to figure out how to live in a new culture, learn a new language, and raise a child—all with very little external support. And I, after living up to the age of five on the Lower East Side of New York, immersed in a community in which I rarely heard English spoken until I started kindergarten, began my life-long fascination with language by committing to learning English (and, as I now regret, abandoning Yiddish).

For some additional insights into my and my family’s deep experiences of dealing with the Shoah, war, and being refugees, see these writings of mine:

Both my personal history and Rebecca’s story are examples of the experiences of millennia of refugees—most recently including those displaced by the war in Ukraine. This rich discussion topic includes families being separated and reunited, the difficult choices people make to survive, and, more generally, the impact of trauma and war. My professional expertise as a language teacher comes into play here also. Over the years, I have taught English and US culture to several hundreds of international students from the Americas, Asia, Africa, and Europe. Some were graduate students, some were refugees, some students came from countries currently in conflict. I have also taught special education to elementary school students in marginalized communities. I learned so much from them all, including how to meld groups for maximum communication.

Speculating on the possible origins of Scott’s unique creation of Rebecca, perhaps the first positive depiction of a Jew in European literature, is another intriguing topic I’d be happy to discuss with your group. Despite the speculation that Scott’s Rebecca was based on the American Rebecca Gratz, this assertion has never been definitively proved and remains a tantalizing mystery. We can discuss the research involved in bringing together such a story and the fascinating history of the era, including of the centuries-long Salerno medical school that allowed men and women–Christians, Jews, and Muslims–to study together in an era when any such collegiality was a rarity. Not to be overlooked is another topic, the ongoing challenge for Jewish women of work versus marriage and family. Medieval, yes, and yet continuing to be contemporary. Though Rebecca of Salerno is not my first published book, it is the book of my heart, appearing when I’m age 75. Just as with receiving my doctorate in language education at age 47, I’ve tended to be a late bloomer—and would love to inspire others to bloom at whatever age they are.